In late August 2008 a method to dump the key for the new Lite-On DG-16D2S drive was released. It requires a serial adapter and SATA controller. Once the key and identification string is dumped, a new drive can be flashed with a spoofed iXtreme firmware.

Thanks goes to Geremia, C4eva, Tiros, Schtrom, TMF, Redline99, and the Xbox-hacker community.

Replacing drive note: When replacing the DVD Drive: It's only recommended to use the BenQ drive at this stage, using other drives gives a very high possibility of getting banned if you go on Xbox Live, obviously any drive can get you banned but the Toshiba-Samsung and Hitachi-LG drives will have a far higher possibility to be banned. A special firmware for TS and HL has to be released to deal with some security sector (SS) issue when spoofing.

Update 27th December 2008: The release of iXtreme v1.5 now enables flashing of the Lite-On drive. It still requires extracting of the key.

This drive started to appear in machines manufactured after 20th April 2008 (2008-04-20). Currently it's not possible to dump or flash the drive, only to extract the key. 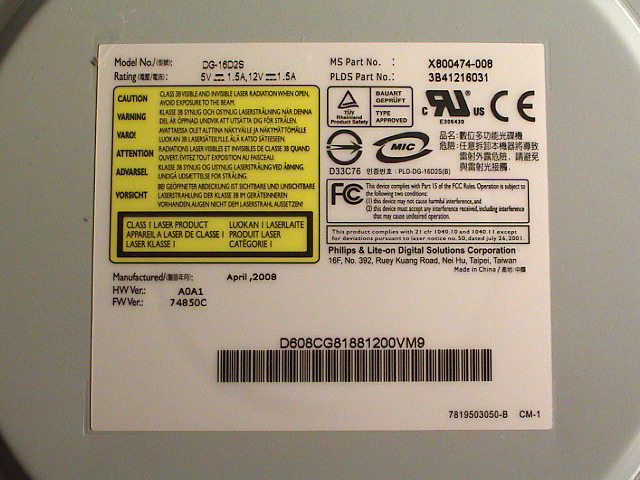 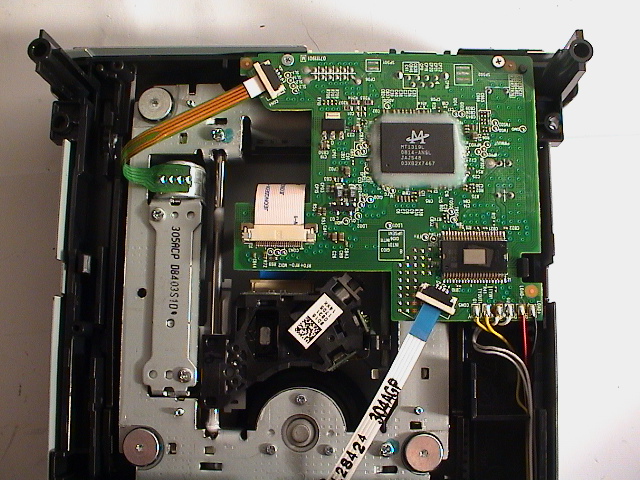 The serial adapter will be connected to the Lite-On drive board and used to interface with the MT1319L controller using the special DVDKey utility (more below).

Either buy a pre-built RS-232 level shifter adapter or build one yourself. The parts are cheap and it isn't hard to build.

Any USB-based RS-232 adapters (like this) will work fine with DVDKey32 (Windows application). The regular 16-bit DVDKey application for DOS will not work with USB-adapters, only COM-port based adapters.

To build an adapter, these two RS-232 transceivers will work fine: 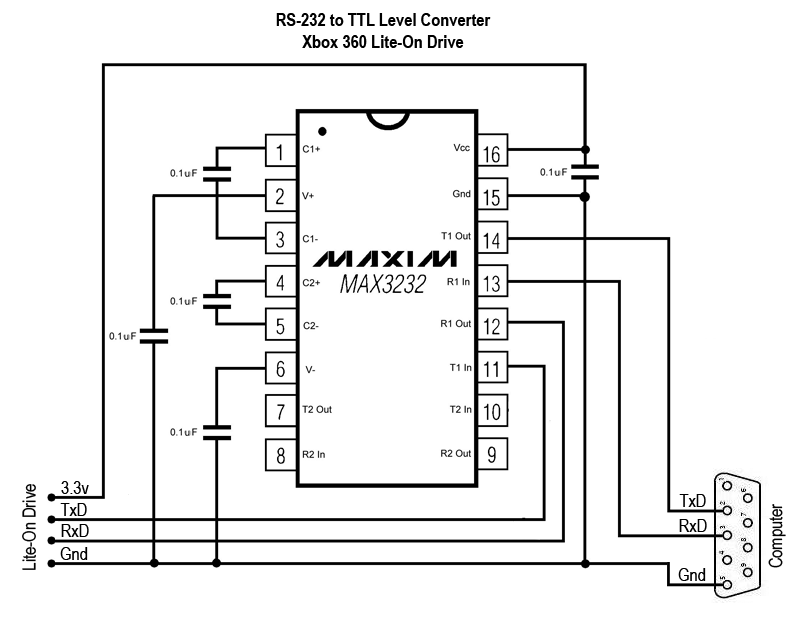 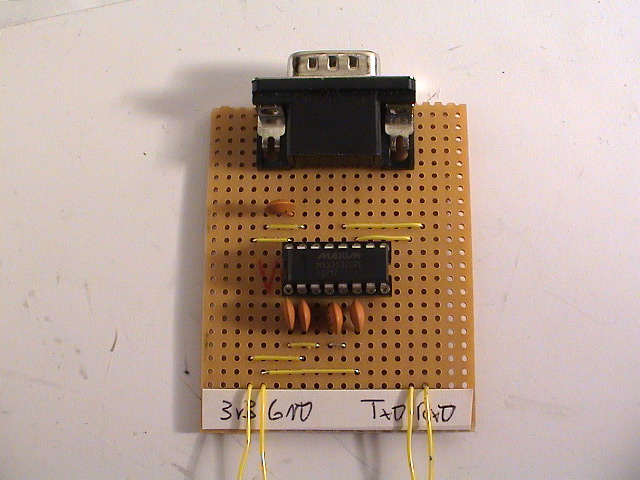 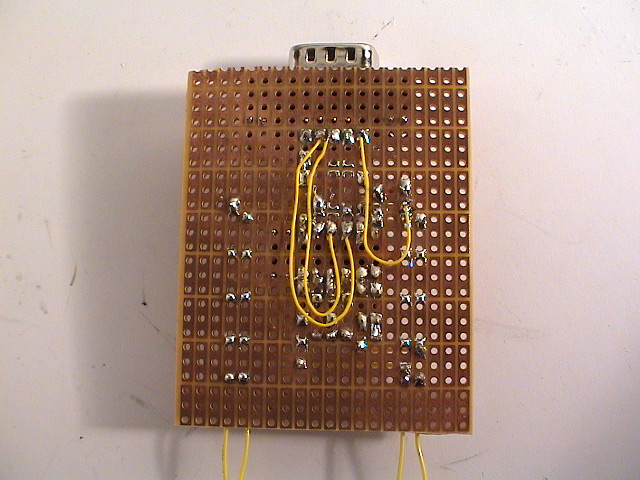 To verify that the serial adapter works, make sure the serial-port is enabled in the BIOS, and join (loop) the Tx and Rx pins together (pin 2 and 3). Open HyperTerm (or any other terminal applications) and try the default settings (9600, 8, None, 1). Type something in the terminal, if it's working it should echo back what you type. HyperTerm will not show what you type/input by default, only what's replied back/output from the RS232 transceiver. For more loopback test info, look here. 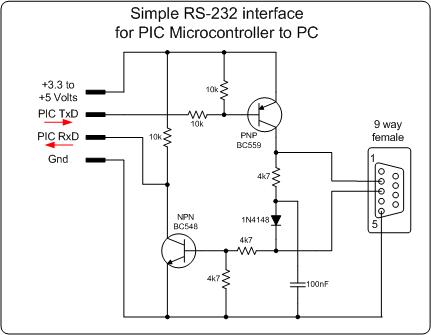 Once the serial adapter is ready, connect the 3.3v, Ground, TxD and RxD points to the Lite-On drive board. There is also two jumpers/solder pads for TxD and RxD that needs to be joined. The points are shown below: 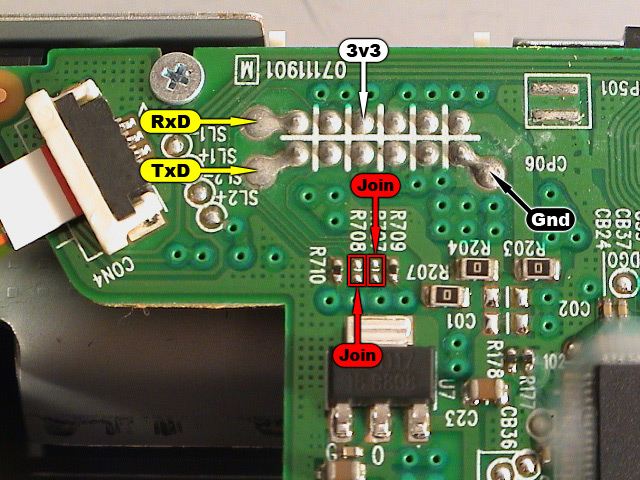 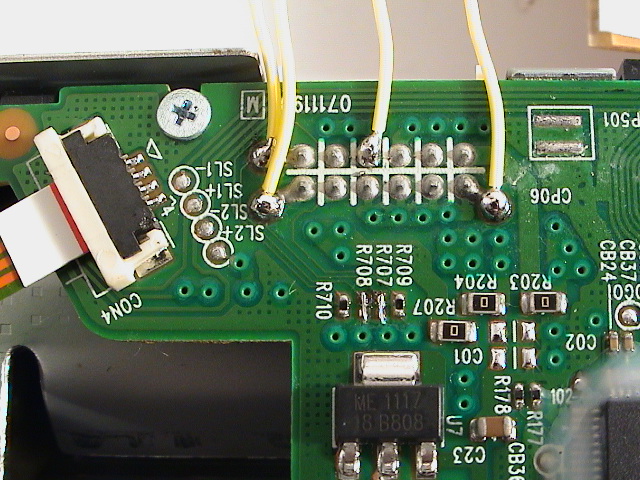 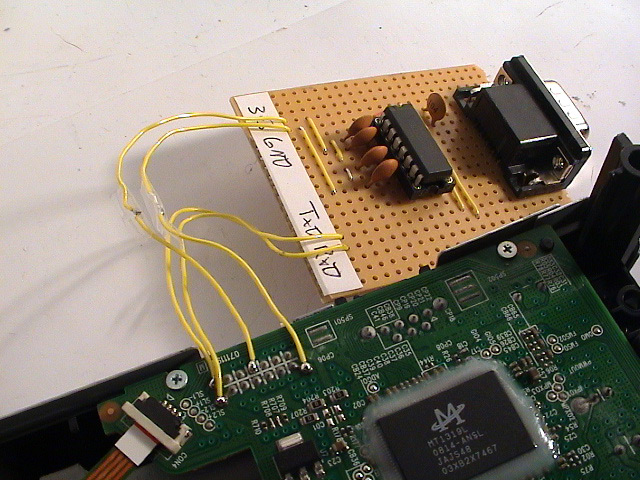 This is the DVD drive power cable signal layout: 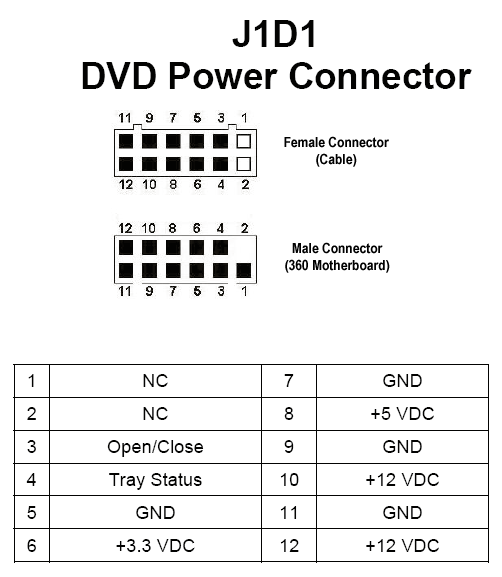 An alternate way to connect the 3.3v, Gnd, TxD, and RxD points is to just join the two points and connect the other points via the DVD power connector/cable. Power and ground goes through to an external adapter, e.g. the Connectivity Kit v1/v2 or 360toPC Kit. While the basic cable doesn't include wires for TxD and RxD, two extra wires has to be inserted into the white connector and then connected to the serial adapter. Although you need wires with pre-cramped hooks at the ends, e.g. from a Xbox 1, DVD-ROM audio cable, or a replacement power cable.

These are the basic requirements to connect the drive to a computer and powering it.

In addition you of course need a new DVD drive to put the key on once it's dumped. Any old BenQ, Toshiba-Samsung, or Hitachi-LG drive will work.

Download the DVDKey utility. The utility will interface with the drive over the serial connection and dump the key via SATA.

Create a DOS boot disk and put DVDKey on the drive.

DVDKey requires the address of the SATA port where the Lite-On drive will be connected. The address location is in HEX format (e.g. 0xA000 or A000).

Currently there are 3 different methods to find the address, some easier than others.

This is a Windows tool to create a boot disk for iXtreme flashing.

Install the application and open it, in the middle of the window, look for the name of your SATA controller, click the question mark on the right-side, the SATA port is the first 4 (four) characters in the DeviceIO string. Here it's A000. 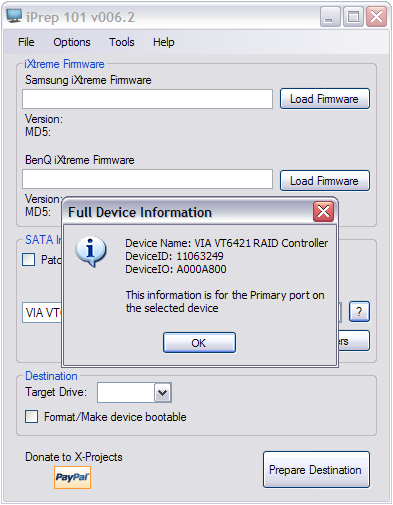 Make sure you have the .Net Framework v2.0 installed if the application throws an error on launch.

DosFlash is used to flash BenQ drives (and Toshiba-Samsung drives). It will report the address of the detected drive before it continues.

Connect the Lite-On drive to the SATA port, create a DOS boot disk and put DosFlash in it, boot to DOS, and execute dosflash.exe in the Dosflash16 directory (DOSFLA~1). Press 'n' on any prompts. The port will be reported in the text string starting with MTK Vendor Intro failed on port.... Press ctrl+c to exit. 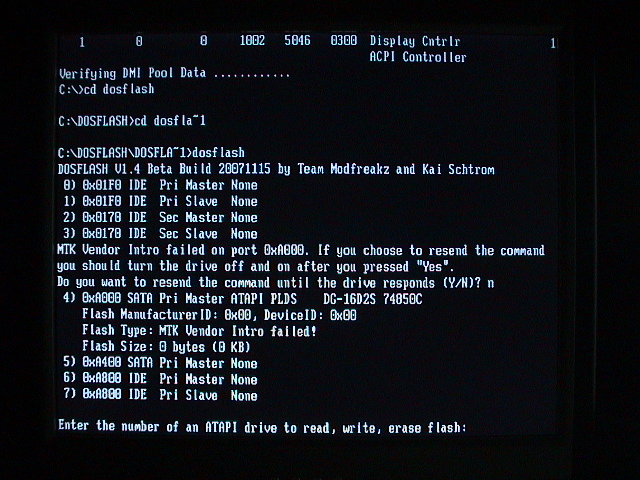 Slax is a Linux distribution tweaked for Xbox 360 use. It will put the Hitachi-LG drive in mode-b for flashing.

Connect the Lite-On drive to the SATA port, burn the image to a CD-R/DVD-R, boot the disc, eject the tray if the boot halts, and login using username root and password toor.

Type dmesg|grep SATA (case is important, remember upper-case SATA) to filter out the SATA messages from the kernel boot log. The SATA port address can be found after SATA max UDMA/133 cmd, before ctl. In this example 0xA000, or A000, is the part that will be used here.

The output should look similar to the below: 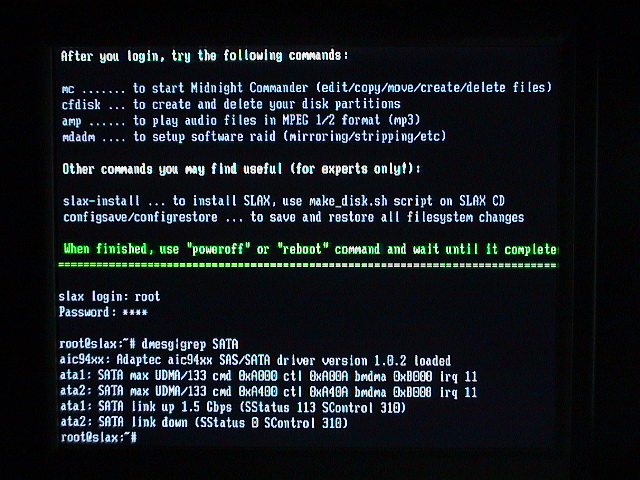 Once the steps above is complete, the dump process can begin.

The tray has to stay half open during the process. Once the drive tray is half-open it will stay open, not close on the next power up as a normal drive would do.

Note: On some setups it's not needed to have the tray half-open, it works fine with the tray closed. 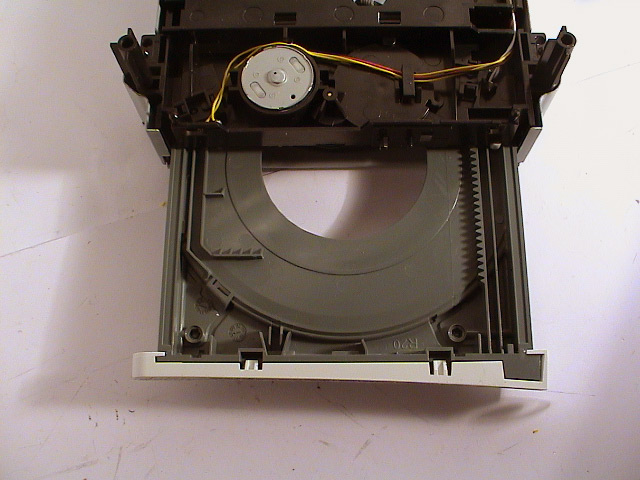 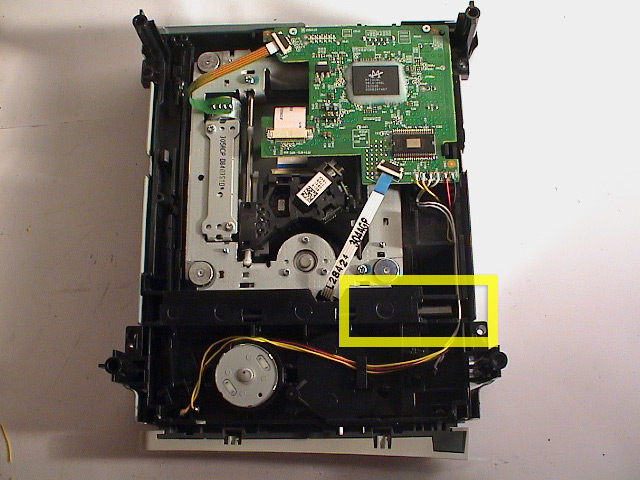 As a side note, all this also work exactly the same on a BenQ drive. Leave the tray half-open and cylce the drive power between each try.

Picture of the dump and setup with Connectivity Kit v1 and Serial Adapter connected: 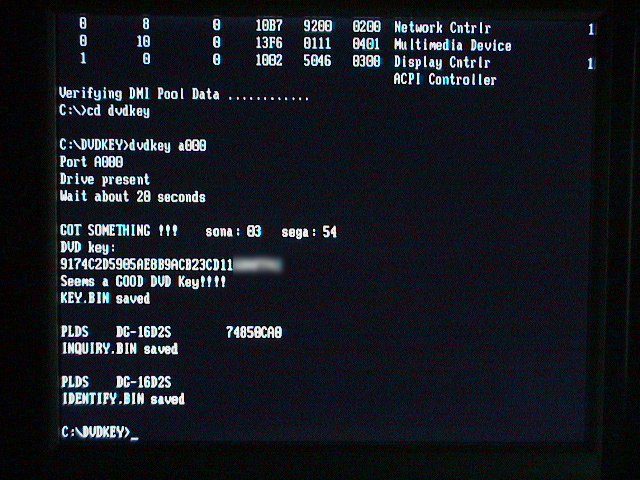 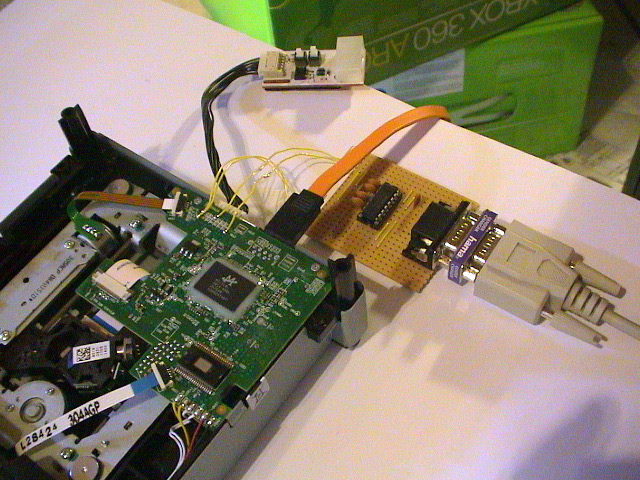 If you got something like this, you need to:

In this case the wrong SATA port address is used. Try iPrep, DOSFlash, or Slax to find the correct port.

For any games to start at all the key stored in the NAND flash has to match the key in the firmware on DVD drive, else only DVD movies will play.

The best way to get hold of the correct hacked firmware is to first flash the new drive with iXtreme and verify that it works. Then use the backup of the previously flashed iXtreme file, as the bases for the new spoofed firmware.

If you haven't written down the key for the Lite-On during the dump process, download Tiny Hexer and open the KEY.BIN file. The key is in HEX form, here it's starting 9174 C2D5 ....

Write down this key and save it to a text file for later reference and backup.

Open 360 Firmware Toolbox, select File and Open, and find the hacked firmware for the new drive. Copy the Lite-On DVD key found above and paste it into the Key field under the Key Information section. Click Save Key to apply the change. 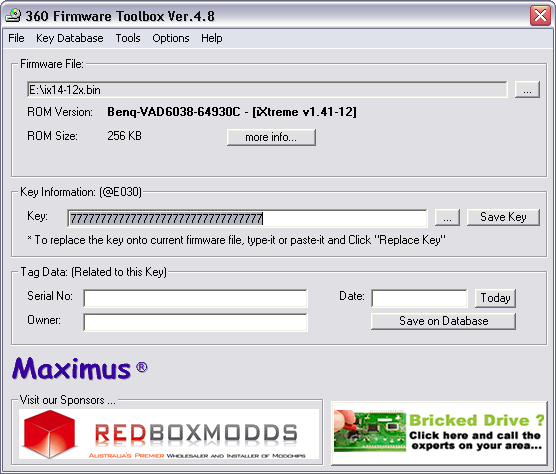 The key is now patched. Next, spoof the drive identification.

The key location is different for each drive and firmware version. Use the table below to find the correct location.

Essentially the key can be found by following this sequence [1]:

The identification string for the Lite-On drive is saved to the INQUIRY.BIN file. This file was created during the dumping process. Not spoofing the drive will result in an E66 error message during the Xbox 360 booting process.

Download 360 Firmware Toolbox v4.8 or newer and exact it to a folder. 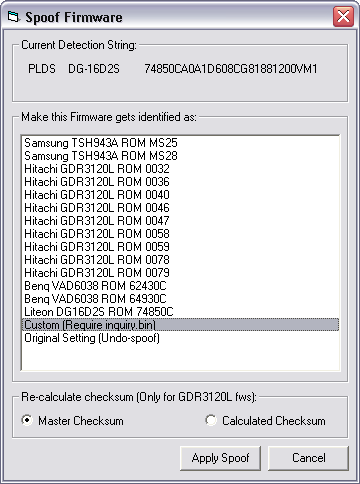 In the next file dialog that's popping up, find and select the INQUIRY.BIN file from the Lite-On dump. This file includes the unique identifier for the drive. Click Ok and a message will report the change was made.

To verify and view the unique identifier, select Tools and Spoof Firmware again, and look at the top of window under Current Detection String. This is the real spoof string.

The firmware should now be ready and can be flashed back to the drive.

There are many good tutorials available that shows how to flash the different drives.

Open the INQUIRY.BIN file in Tiny Hexer, select all the 6 lines (ctrl+a), and copy it (ctrl+c).

Next, open the hacked firmware and find the correct range to replace in the table below. The block starts with 0580 0032 .... The identification string is 0x60 bytes long. Mark this range and paste the Lite-On inquiry block into this selection.

The firmware should now be ready and can be flashed back to the drive.

There are many good tutorials available that shows how to flash the different drives.

To summarize the entire process to a simple step-by-step guide[2]: