I decided to ditch the standard Eee Xandros Linux distribution and go for the more user centric Ubuntu distro. At the time of writing the current release is 7.10, codename Gusty Gibbons.

For the installation I used a regular Pretec i-Disk Tiny 1 GB USB 2.0 flash drive. Almost all flash drives are either formatted as FAT16 or FAT32. For a computer to be able to boot from a flash drive it has to have support in the bios for USB drives and the flash drive has to have a master boot record (MBR), i.e a entry-point to load code.

I'm using a Windows machine to perform the preparation, but it's fully possible to do it on a Linux machine.

To install a Linux bootloader on a flash drive, there is a wonderful tool called syslinux. I'm installing t

The normal way to install a distro is either via a CD/ISO or netinstall by downloading the files. This method will use the CD/ISO method and copy the files from the CD/ISO over the the flash drive.

The installation should work as if it was running form a CD. Nothing special is done to make it run from a flash drive other than renaming the directory and files mentioned above.

If the Windows installation overwrites the grube bootsector, use these steps to rewrite the sector.

A few quick things to get rid off after installing from a USB drive.

Remove the cdrom references in /etc/fstab.

Next, when installing packages apt-get tries to load packages from the cdrom, and the package download might be disabled if the installer didn't detect any Internet connection.

To make the following confirmation easier and to avoid constrain your hands when typing on the Eee PC keyboard, install SSH and login remotely. Use the ethernet-port to get a network connection, works right out-of-the-box.

The tweaks below will correct some of the faults and limitations with the default kernel. It's recommended to go with a custom kernel, se below.

I replaced the default mini PCI-express card for a new Intel 4965AGN adapter, and I had problems with the Linux driver in kernel 2.6.22. It keept deauthorizing and authorizing when I tried to connect to a WPA access point. It worked once but never after that.

If you're using the default mini PCI-express adapter, try one of these these methods.

I tried to use the existing 2.6.22 mac80211 module and continue to compile the iwl4965 module, but it didn't turn out good. The driver complained about missing functions and 'timed out' when trying to bring it up.

A last thing could try was to test the ndiswrapper driver hackery trick and use a Windows driver. Fortunately, it turned out very well and I finally got a stable wireless connection. [1]

Install the necessary packages. The ndisgtk is a graphical utility to set up ndiswrapper.

Disable the Linux drive by blacklisting it in modprobe.

Download the driver for Intel 4965AGN v11.1.1.0 for XP. Extract the files to a directory and if necessary upload them to the Eee PC.

Either use the ndisgtk utility or ndiswrapper to install the driver via the correct '.inf'-file. For this adapter there were two '.inf'-files, NETw4k32.INF for Windows 2000 (k) and NETw4x32.INF for Windows XP (x). I used the last one, the first gave me a 'invalid driver'-message.

After a short while the driver should've been installed successfully.

And add the ndiswrapper module to automatically load on startup.

Reboot the system and the adapter should come up and be available from the network-admin systray icon. 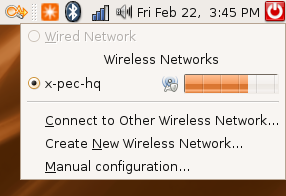 My system hang and crashed when I tried to 'modprobe ndiswrapper' but I think that had something to do with the old Linux driver still being loaded. After a few reboots and tries it worked.

Use the network-admin systray icon to access the available wireless networks. Or alternatively install wifi-radar for better wlan management.

To remove the ndis driver to start over, try:

The Eee PC microphone is not detected correctly and a quick fix is to add the line below to /etc/modprobe.d/alsa-base.

And reboot to load. To test that the microphone works, use the Sound Recorder program under Applications and Sound & Video. It seems whichever input source you select it records the microphone. 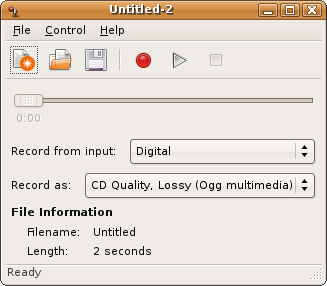 There are a few kinks with the stock Ubuntu kernel resulting in unstable wireless networking, no suspend and hibernate, no working HPET clocksource, SD-card corruption, and more.

If the default Ubuntu kernel was used before and the tweaks above as apply, try to revert and remove the changes done, like the wireless and audio fix. These will interfere with the new custom kernel as it will fix most of the problems.

Download the kernel headers (both) and image deb packages.

During the installation, the GRUB configuration will include the new kernel and updated the boot menu. Reboot to try out the kernel. It's possible to revert back to the old kernel at any time.

All Intel processors has a special clock generator. The Linux kernel can use this clock to improve the accuracy of the ticks use to drive the system.

Open the /boot/grub/menu.lst file and add "clocksource=hpet" to the line below.

Notice that it's normal for the GRUBE settings to be commented out, that's how update-grup reads the settings and compiles the final lins at the end of the file.

On the next reboot the kernel will use the new clock. Verify it be checking the special system file below.

AppArmor is a security framework and not generally needed. The custom kernel will complain when it first loads with a brief message. It's a minor thing.

To suppress this message edit the /boot/grub/menu.lst configuration and add "capability.disable=1".

AppArmor is built into the kernel and can not be disabled. To fix this problem, the AppArmor application has to be updated to match the new kernel.

Either compile from source or download the already compiled AppArmor packages and install them the normal way [2].

Reboot and the error message should've gone away, and when restarting AppArmor it should succeed.

The webcam is not active and the uvcvideo module has bee excluded from the custom kernel. Fortunately, it's possible to use the modules package for 2.6.24-2 and load the correct module [3].

Make the module load on startup.

Reboot or load the module directly to activate the webcam.

Verify that the video stream works by downloading the Skype Ubuntu Linux beta release with video support. Go into Options and Video Devices, click Test and the webcam stream should show.

The /proc/acpi/camera special file is deprecated in this kernel.

I think Bluetooth is so standardized that every adapter you through at it will work, at least my adapter did.

To get my Logitech V470 Bluetooth mouse, I just had to enable/insert the Bluetooth adapter, make the mouse discoverable by pressing the Connect-button, and enter the simple commands below

Connect to MAC address of the mouse.

And it just works! To make the changes active over reboots, enter these lines into /etc/default/bluetooth.

On the next reboot, the Bluetooth manager might ask you to authorize that the mouse is permanently granted to automatically connect.

kiwidrew has written a eee.ko module to control the fan, FSB, and voltage, and read out the CPU temperature. Future versions will hopefully allow brightness and LED control.

To load it on start-up, remove the black list and add the modules to /etc/modules.

When the module is loaded, a bunch of special files is available via /proc/eee/.

The processor sensor temperature is available via /proc/eee/temperature and /proc/acpi/thermal_zone/TZ00/temperature, the former seems to be more accurate.

The Front-Side-Bus (FSB) controls the frequency of the processor. The processor speed is calculated by multiplying the FSB with the CPU multiplier, e.g 100 x 9 = 900.

On the Eee PC, a PLL (Phase Locked Loop) is used to generate the FSB frequency. It has a base frequency of 24 MHz. The raw configuration of the PLL can be dumped from /proc/eee/pll. Another special file is used to program the PLL, /proc/eee/fsb.

To change the processor speed, the Eee module expect 3 parameters to be passed to /proc/eee/fsb. The first is the new FSB speed, ranging from e.g. 70 for 630 MHz and up to 100 for 900 MHz. Everything above or below those values are regarded as overclocking or underclocking, respectively.

There is currently no way to check the system if the speed change has been committed. The information in /proc/cpuinfo is invalid and not updated. Benchmarking before and after is the easiest way to check if there is any change in processing power.

Little script to quickly switch between 630 MHz and 900 MHz:

If you get a 'Permission denied'-message when reading or writing to the special files, try the sudo sh -c method.

The flash drive is only 4 GB and I need all the space I can get, removing i.g. OpenOffice.org will free some space.

The default desktop theme is somewhat large and occupies prescious work space. These commands will make the fonts and panels smaller, and fix a few other things [6].

Do not display the incorrect battery warning at login.

Unconstrain windows to the top of the screen.

These commands will be saved and survive a reboot.

The Ubuntu boot up is not exact fast compared to the Xandros install. Mine takes a little over 60 seconds with 8 USB devices connected.

In addition to the new Clock Source mentioned above, changing the concurrency line below from 'none' to 'shell' will allow the startup script to start simuntaniously and in parallel. This will squeeze the most out of the CPU to lower the boot-up time a few seconds.

But there is a bug, HAL (Hardware abstraction layer) and D-Bus is started at the same time which causes HAL to fail as it depends on D-Bus. The system will boot but devices will stop working, e.g. wireless adapter. To fix this, move the HAL script to start at a later step [7]

When shutting down the machine, it won't power off properly because a audio module was still loaded. Add a line in /etc/init.d/halt to unload the module during shutdown.

The next shutdown should power off the machine completely.

There is a handy tool called 'powertop' that will monitor and analyze Intel-based systems, and recommend things to change to increase the battery life.

Since the system is installed on a USB drive, it's pulled constantly and processes a fair bit of wakeups while idle.

With the Bluetooth hcid_usb unloaded, the flash drive is, for some reason, pulled less.

The Eee PC and my modifications heavily rely on USB and it's important that the devices is suspended once they're idle. Use the commands below to verify that USB suspend is enabled. The default Ubuntu kernel has it enabled by default.

Check if enabled, 2 shows it's enabled.

Check all connected devices, 1 or 2 means 'wait that amount of time when idle before suspending'.

For some some reason Bluetooth pulls the system constantly.

The iwl4965 driver is active and continuously searching for beacons from access points.

To limit the number of writes necessary, it's possible to disable the atime bit that updates the attribute when the file was last access or opened.

In /etc/fstab, add noatime to the root filesystem and remount.