The Lawmate systems are made in Taiwan and is a popular choice for FPV use when coupled with RC control systems on a lower frequency band (36MHz, 72MHz, 433MHz). Rooted in the CCTV market, these units are designed to be powered on all the time and be reliable. With a few modifications the equipment will become a powerful piece of equipment for any FPV vehicle.

To get hold of the units used below, I recommend Infinity-hobby as they are located in Taiwan, where Lawmate is situated, and they also offer great shipping options (not sponsored). 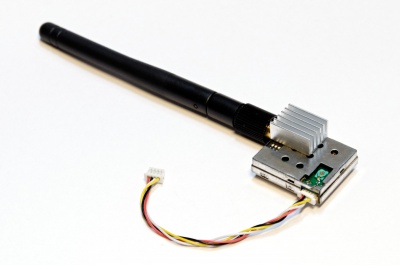 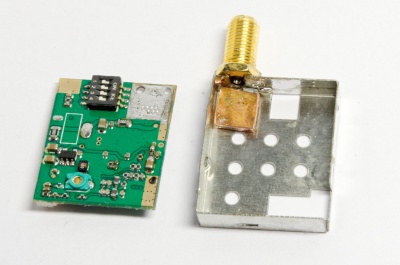 The TM-240500-LM transmitter has around 500mW RF output power (cooling increases the max.) and is built on a Anadigics AWL6153 power amplifier. The vtx is compact and lightweight, 12 grams, which makes mounting easy. This is the newer model with the frequencies slightly rearranged [1].

The supplied cable has the following connectors/housings:

The fourth DIP-switch does not do anything, AFAIK.

For maintaining full output power during extended operation and to minimize center frequency drifting, it is essential to keep the unit cool and under thermal control. It is shown as the unit gets hotter the output power decreases [2] (max. amplifier operation temp. +85C). The standard thermal cooling supplied is dismal and lacks physical contact with the casing to dissipate the heat in a proper way. While there is a heat-sink, it is mounted in the wrong side for optimal heat exchange. This causes the heat to be trapped inside the can where it can not easily dissipate to the outside environment.

By opening and removing all the excessive solder, a new thermal path can be built into the casing. I used three small 0.75mm copper pieces soldered together. The pieces were soldered to the casing and a thin layer of silver-based (Arctic Silver 5) thermal paste was applied between the board and the copper pieces.

Lastly, move the stock heatsink from the top tin case to the bottom case where the heat now dissipates. The DIP-switches might be covered up, thus either change the channel to the desired frequency now or cut away a small piece of aluminum to expose the switches.

The video input impedance was measured to be 342 Ohm, over the expected 75 Ohm. Proper impedance match will optimize brightness and contrast [4]. Some cameras or OSD units might not work if the impedance is out of spec.

The SMA connector on the stock unit is supported by the center pin and a fairly brittle solder spot to the tin case. To improve the support add a rim of solder around the connector. Heat the entire connector to avoid weak cold joints.

Make sure to take into account that the SMA connector gap on the top case still fits on the bottom case. 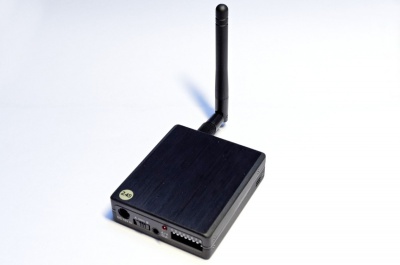 The RX-2460CK receiver contains a Comtech FM2400RTIM8 module with a relatively good receiver sensitivity, -95dBm [5]. The signal input is a regular female threaded outside and center-socket inside SMA connector [6].

Switch B (always use this with Lawmate tx): 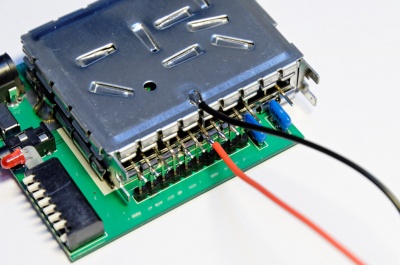 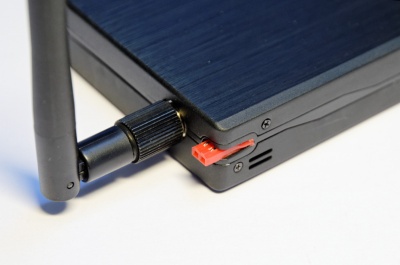 The RSSI (Received signal strength indication) output is an analog voltage changing reflecting the relative strength of the received signal. By using multiple receivers a diversity switcher could dynamically pick the one with the best signal.

The image below shows pin 9 which is the RSSI output of the receiver module. 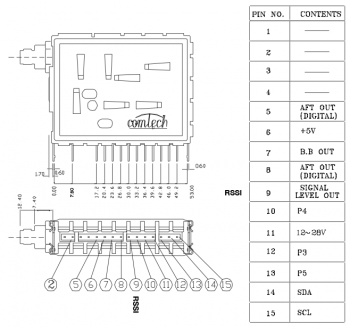 Connect a wire to the pin and another wire to ground and feed the pair out of the casing to a female connector for easy measuring. I used a JST-connector and cut down the sides so that it would fit inside the stylus-pen holder socket. 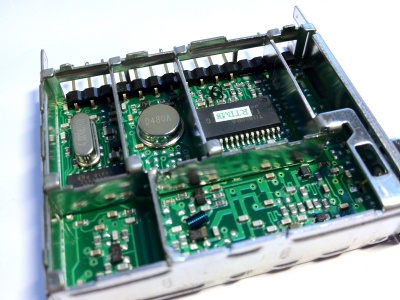 The default ComTech module uses a 20MHz or 27MHz SAW IF filter which is normally used for receiving a signal from a satellite, but for terrestrial use a narrower bandpass filter is preferred to limit the near-band noise and thus improving the signal-to-noise ratio.

By removing the default F480-2 filter and replace it with a new ECS-D480A bandpass filter, should result in a gain in signal-to-noise of be about 1.4dB [7].