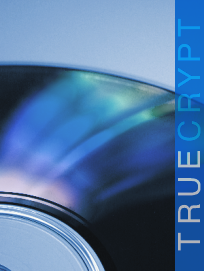 I have multiple local servers and machines I want to backup to one central location. The criteria is that it has to be encrypted, both when transferring and storing, automatic and transparent, redundant and off-line backup. This method is based on Open Source projects.

A few years ago I found a great way to backup my servers to one central backup server using rsync and ssh. The backup server was located 100 meters away from the location with the servers, connected via wireless lan.

Every server was set up to use keys to login to the backup server without a password, making the process transparent. The rsync process was done over encrypted ssh, making it secure when transferring.

This method worked great and every few problems cropped up, other than lack of free space on backup drives. Both ends (clients and server) had a simple bash script that initiated the mounting of the drives, setting up ssh, including/excludign files, and rsyncing them over. Crontab took care of the scheduling.

All the tools used are Open Source and distributed free.

Many of these tools have dependencies, but these are the major components. Command-line/terminal will be heavily used to manage, and run this routine.

The new routing will be based on the previous method but simplified and the disks will be encrypted using Truecrypt.

For redundancy I will be using two 250 GB external USB 2.0 bus-powered 2.5-inch hard drives, mine are from made by Western Digital. Both drives are identical and allows me to take one for backup at home (1) while leaving the other at work (2) to backup the servers/desktops. 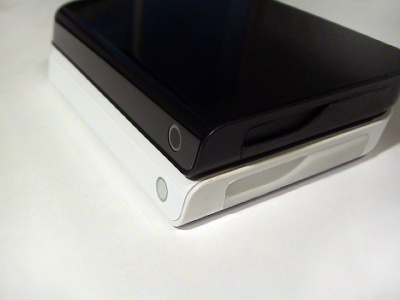 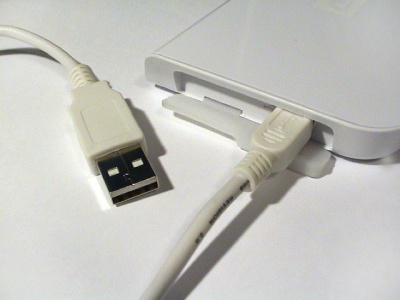 When I see fit, I can swap the one at home (1) with the one at work (2) (and vice versa) and rsync will take care of the discrepancies by doing a incremental update. The incremental update will find all the new and modified files since the last time it saw that drive (1) and only copy over those files, while at the same time I have a redundant backup of all the files on the other drive (2). The 'freshness' of the redundant files depends on how often I swap out the drives (probably once a week).

Another issue I had was to find a filesystem that allowed for Linux permissions to be stored while still be accessibly by Mac OS X and Windows. After trying to get ext2/ext3 and NTFS to work, I found that, weirdly, HFS+ would be the most compatible filesystem. It was the only fs to have proper read and write, large file, and attribute/permission support. I didn't want to store backups in tar-balls.

Update: The HFS Plus Linux drives has problems with some Linux files or allocation and resulting in an Inode count incorrect error message when trying to fix the problem with Disk Utility. If the problem was not fixed it won't mount at all. The fix was to create to separate partitions, one HFS Plus formatted for the Mac mini files and one Ext3 formatted for the Linux server and Windows client files.

My external hard drive was automatically recognized and the proper modules were loaded without problems by the vanilla 2.6.18-4 Debian kernel. The drive came with one partition that was already FAT32 formatted.

Unfortunately, my motherboard and chipset only support USB v1.1.

Update 2009-09-09: I finally got around to install a new NEC based USB v2.0 OHCI/EHCI PCI card. Everything should backup faster from now on.

To set-up the partitions, use the following procedure:

Truecrypt v6.1 and later is a lot easier to build than earlier versions because it used wxWidgets (cross platform programming).

My build halted on a warning: pkcs11.h: No such file or directory error, download the following files into the truecrypt-6.2a root.

The final binary should be in the Main directory. Copy it to /usr/bin or /usr/local/bin to make it globally available.

There might be some package dependency for fuse and device mapper. I had to install fuse-utils in addition to the already installed packages from the Truecrypt 4.3a setup.

To set-up a new drive, use the command truecrypt. The set-up is guided and asks a few questions before setting up the drive for you. Do this for each partition.

I choose not to use keyfiles as I'd experiences some problems with them earlier, might work later though. The quick option finishes the format at the end in under a minute. I don't want to hang around waiting for the drive to format when I'm going to re-format it later anyway. Truecrypt will normally randomizes the sectors while formatting the drive making it less prone to obscurity attacks.

For the Mac partition I reformat the drive as HFS+ aka. the Mac OS hierarchical filesystem.

To to mount and dismount the new Truecrypt encrypted drive using terminal commands:

Linux has a good hfsplus module that allows read and write. For Windows, MacDrive seems to be a good choice.

The Mac HFS+ filesystem doesn't hold all the attributes needed for Linux files, so the Ext3 filesystem is used for backup of Linux and Windows machines.

Try to mount and dismount the new Truecrypt encrypted drive:

It's also possible to manually use the Truecrypt GUI for all platforms (since v5.0) to select and mount the encrypted drive.

The current setup does only uses a simple password to protected a Truecrypt partition. But it's possible to use a key-file as a cihper, it only requires minor changes to the truecrypt commands.

The server script is made on and for Linux, and will work out-of-the box on most systems as long as the default tools (grep, echo, chroot, date, sudo, etc) are available.

Add the fuse filesystem module to /etc/modules to make sure it is loaded on boot-up.

The script will change root directory (chroot) to the backup directory (e.g /mnt/backup/elitus/) right before the rsync procedure starts. This strengthens the security and prevents a rouge remote client to gain system access.

Now, try this command once one of the clients are set up, the IP address being the backup server.

Nothing has to be executed manually on the backup server, the server script will be executed once the client logs in remotely.

Watch the syslog for errors if the script fails or exits with a rsync error: error in rsync protocol data stream (code 12) at io.c(635) [sender=3.0.3] message.

I noticed that when I updated to OpenSSH 4.3p2 (and later) I had to update the client to the same OpenSSH version that was running on the server. Also run update-locale to generate an empty /etc/default/locale file.

If fusermount complains about a missing /dev/fuse:

The kernel might not have set up the dev-mapping properly. Create a symb-link from /dev/.static/dev/fuse like this:

I use a Mac Mini at home as my desktop machine and the machine is set up as the backup server for another server and itself. As Mac OS X is based on Unix and all the Unix tools are available (grep, cut, echo, etc), including rsync. 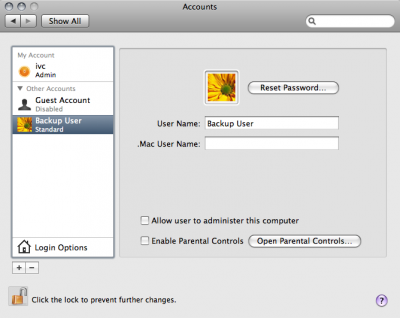 When a remote client is setup, use this command on the cleint to backup the entire drive. The IP address being the backup server.

As a side note, only a few minor adjustment has to be done to make the backup server script compatible.

The backup client script will run without much alteration on both Linux and Mac OS X. Windows is a bit more tricky but it works.

A backup over an ethernet network averaged 2.7 MB/s.

The Linux client script should work with most default Linux distributions.

Extract and put in /Applications/.

On Windows none of the required tools are installed by default. Fortunately, there is a Unix environment emulator called Cygwin. It works seamlessly with the Windows environment and can be used to run command-line binaries and scripts.

Now, edit the client script settings (backupdir, etc) using the nano editor. To backup files on the Windows drives (c:, d:, etc), the prefered way is to exclude all by default and include only the files and folders you want to backup (opposite the Linux setup). Cygwin makes the Windows drives available under the /cygdrive/ directory.

To backup everything on e.g. the d: and e: drives, run this command: 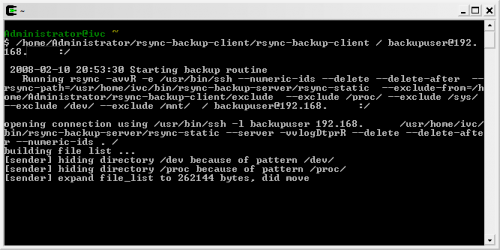 A normal run will include all files by default and excluded files can be listed in a 'exclude'-file located in the same directory as the rsync-backup-client script. Special files and system devices (dev, sys, proc) are already excluded in the rsync command-line string.

Files to include (normally only / is spesificed to include all files by default):

Spaces in the directory name need to be triple escaped or double quoted or a variation, see the rsync FAQ.

Files to exclude (listed in the 'exclude'-file):

To automate the remote backup to a central server, login has to be password-less. A good way to do that is to set up ssh to login using keys.

Make sure the authorized_keys2 file has the proper permission so that the backupuser can read the file (it can happen it's owned by root/600). A password-less login can also be setup on the backup server itself, use the same procedure above to set it up.

Automatic backup is essential for a good backup routine. On Linux, crontab can be used to execute commands on specific times. I like to run the backup scripts when there is little activity, usually that is in the middle of the night.

On the clients I put this line in /etc/crontab to run it at 5 am:

The script will backup the entire filesystem (/) to the password-less user (backupuser) on the backup server (192.168.1.1). For best performance the clients should be scattered on different time slots.